With its relatively small footprint and a history that includes some of the most influential events and people in the annals of our county, Maryland provides a unique opportunity to easily explore much of the story that makes us who we are today. Many of the historical sites in Maryland are located just a short drive apart, making it easy for history buffs to cover many attractions in a single day. Here are the 19 best historical sites to visit in Maryland.

Fort McHenry is one of the most famous historical sites in Maryland, as Francis Scott Key wrote the words that would become our National Anthem after he witnessed the defense of Fort McHenry during the Battle of Baltimore. Originally titled The Defense of Ft. McHenry the song describes the events which led to the turning point of the war, and eventual American victory. Today you can visit the Ft. McHenry National Monument and Historic Shrine for a self-guided tour, artillery demonstrations, and many events throughout the year. 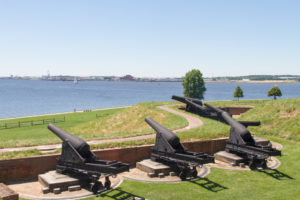 Located in Annapolis, the Maryland State House was the first peacetime capital in the country, the only state house to have ever served as the nation’s capital, and the oldest state capital in continuous legislative use. In short, it’s full of history! This is where the Maryland General Assembly convenes each year, as well as the location of offices for elected state officials. Self-guided tours are available nearly every day of the year and include exhibits featuring historic documents, antiques, portraits and more. 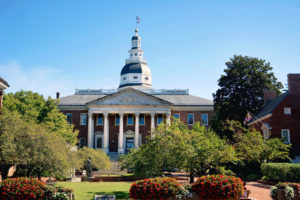 St. Mary’s City was the fourth permanent English settlement in North America and the site of the state’s original capital. After the capital was moved to Annapolis in 1694, St. Mary’s City was largely forgotten. Nearly 250 year later, archeologists became interested in learning more about one of the oldest historical places in Maryland. There are plenty of ways to explore the rich history of the area. Get a peek at a fully open, archaeological excavation at St. John’s Site Museum. Tour a replica of the State House of 1676. Step aboard the Maryland Dove to experience life as a sailor during the 17th century. Even the local trails are marked with pertinent historical facts to peruse as you take in the beautiful scenery.

Comprised of the oldest and most comprehensive collection of railway history on this side of the globe, the Baltimore and Ohio Railroad Museum is a must for those touring Maryland historical sites. The museum is full of railroad equipment from the 19th and 20th centuries. The original shop buildings and surviving track provide a unique way to view the progress of the American railroad and its impact on our culture. You can even take a ride along the first commercial mile of railroad track laid in the country.

23,000 soldiers were killed, wounded or went missing during the 12-hour Battle of Antietam, making it one of the most notable days in U.S. history, and one of the most visited historical sites in Maryland. It is said that this battle led Abraham Lincoln to issue his preliminary Emancipation Proclamation. Antietam National Battlefield is full of activities for the entire family. Explore the museum exhibits and visitor center before you join a Park Ranger for a battlefield talk, take a self-guided hike through any of the major battle locations, and you can even complete a battlefield scavenger hunt as you show yourself around. 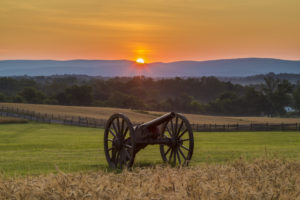 The Benjamin Banneker Historical Park and Museum honors the legacy of Benjamin Banneker, an accomplished mathematician, astronomer, author, and tobacco farmer. The museum is home to the Banneker Gallery, Community Gallery, Banneker Discovery Zone, Natural History Exhibit including live animals, and a Sky View Computer. Also on the grounds of the 142-acre park is a replica of the cabin in which Banneker lived, several gardens, an orchard, and an apiary.

Harriet Tubman was one of our county’s most famous abolitionists and human rights activists. And the site of her first known act of public defiance, The Bucktown General Store in Dorchester County, is one of the lesser known historical places in Maryland. Today it operates as a museum which provides a peek into local life through Tubman’s eyes. It’s also part of the road trip known as the Harriet Tubman Underground Railroad Byway.

Maryland’s first English Settlers under the Baltimore proprietorship arrived at St. Clement’s Island in 1634. The 40 acre island is now a Maryland historical site and State Park with areas to hike, picnic, and bird watch. You’ll also find a 40-foot cross which stands as a memorial to the first colonists who sought religious tolerance, as well as a replica of the island’s original light house. The Park can be accessed via Water Taxi from the St. Clements Island Museum. 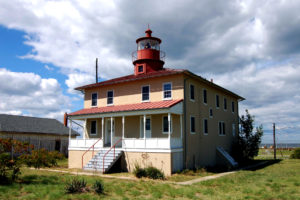 In 1813 Casselman Bridge was built as an important link along the National Road. Measuring 80 feet long, the bridge was, at the time, the longest single span stone arch bridge in the world. Although skeptics predicted its collapse after construction was complete, it continues to stand today and is visible from historic Route 40 in Garrett County. At the foot of the bridge stands Spruce Forrest Artisan Village, which contains several historic buildings relocated from various sites throughout Western Maryland. If you’re looking for historical sites in Maryland that include beautiful scenery, the Casselman Bridge is a great place to visit. 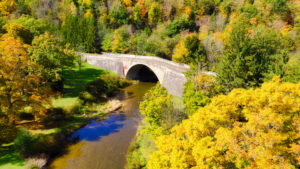 Construction began on Fort Frederick at the beginning of the French and Indian war in 1756, and it served several purposes throughout the century that followed: first a staging and supply area for English troops further west, later for protection of 700 English settlers during Pontiac’s Rebellion, then as a prison camp after the Revolutionary War. It was then sold at auction in the 1790’s and was mainly used for agricultural purposes until the Fort and much of the adjacent land was purchased for use as a State Park. The Fort itself is undergoing restoration through 2021, but several self-guided activities are available in addition to all outdoor recreation activities. 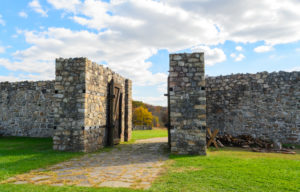 Cover many Maryland historical sites in one trip. Follow the 100 mile trail taken during the Chesapeake Campaign of the War of 1812, during which British Troops moved from Virginia, through Washington DC, and made their way to Baltimore. The Star Spangled Banner Byway is rich with history and scenic views, all intended to commemorate the events leading up to the Battle of Baltimore. 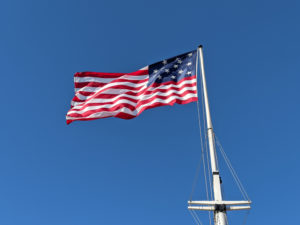 Historians are not clear exactly how involved Dr. Samuel A. Mudd was in the plot to assassinate President Lincoln in 1865; however, it is known that after fatally shooting the President, John Wilkes Booth stopped at several locations as he fled the state, all of which would become historical sites in Maryland. One of these is the home of Dr. Mudd, who treated Booth’s broken leg. The Dr. Samuel A. Mudd House and Museum, located in Mudd’s former residence, seeks to educate the public about his story as it relates to the assassination of our nation’s 16th president.

The Battle of Monocacy, which took place just south of Frederick, MD in 1864, was dubbed the Battle that Saved Washington. Although the Union was not victorious, the battlefield may arguably be one of the most important historical places in Maryland. The goal of the battle wasn’t necessarily to win, but to slow General Jubal Early’s advancement towards the largely unprotected Capital. It worked. The battle of Monocacy provided time for Federal troops to arrive and defend Washington D.C. from Confederate capture. Monocacy National Battlefield is largely unchanged since the mid 1800’s, and provides 1600+ acres of farm fields, historic buildings, and gorgeous views. 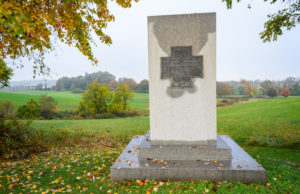 Learn about the lives and legacy of soldiers and surgeons whose contributions to Civil War medicine continue to save lives today. The National Museum of Civil War Medicine is located in a Downtown Frederick rowhome which served as a furniture shop during the Civil War. Open to the public on weekends, the museum and includes a Clara Barton Themed Escape Room in addition to five immersion exhibits related to aspects of Civil War medicine. 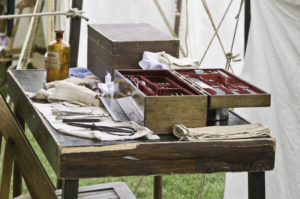 The best known conductor of the Underground Railroad, Harriet Tubman, risked her life to guide countless enslaved African Americans to freedom. The Harriet Tubman Underground Railroad National Historic Park preserves the landscape Tubman used for these purposes. Stop by the Visitors Center for permanent exhibits and interpretive experiences before strolling through the Legacy Garden. 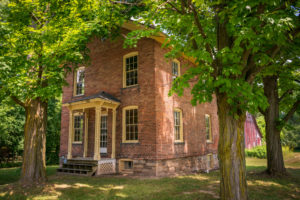 Located in Washington County on top of South Mountain, you’ll find the first completed monument dedicated to the memory of George Washington. The granite structure was erected over the course of a single day by the citizens of Boonsboro, MD in 1827. The nearby Washington Monument Museum contains displays and artifacts about the history of the monument, and the Washington Monument State Park offers numerous opportunities for hiking, birdwatching, and camping. From the top of the monument you find views of three different U.S states, making this yet another Maryland historical site full of incredible scenery in addition to an interesting story. 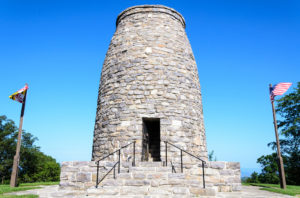 Visit the Edgar Allan Poe House and Museum for a unique look into the life of the famed author for which it’s named. The rowhome, located in what was then the countryside, and is now part of Downtown Baltimore, was Poe’s residence from 1833-1835. It was during this time he began to gain notoriety for his stories, poems, and reviews, many of which were written from this very home. The Museum is open Thursday – Sunday for self-guided tours. 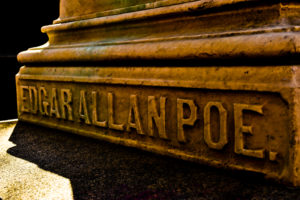 Intended to defend the Potomac River approach to Washington, D.C., Fort Washington was built in 1809 on the bank of the river in southern Maryland. This historical landmark remained an active post through WWII. Fort Washington Park provides a wide variety of activities including fishing and hiking as well as monthly Civil War artillery demonstrations. Visitors can even take a guided tour to explore the Fort’s features and its role in guarding our Nation’s Capital. 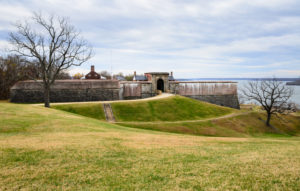 Stay in Hanover, Maryland During Your Visit

Hanover is located within easy driving distance of many of the most notable historical sites in Maryland, making The Hotel at Arundel Preserve a great starting point and home base for your explorations. Our luxurious guest rooms and suites, top notch amenities, and delicious culinary options make it easy to relax after a day full of history and adventure. Contact us today for details on our getaway packages or to book your stay.