What to Know About Visiting Edgar Allan Poe’s Grave

Similar to his poetry, both the life and death of Edgar Allan Poe are tinged with darkness and peppered with inexplicable oddities. Even the site of his burial is known for several peculiar incidents which occurred in the years following his death. It is for this reason that the Edgar Allan Poe gravesite is one of the most well-loved attractions you’ll find in Baltimore.

The saga of Edgar Allan Poe’s grave is convoluted to say the least. After his death in 1849, Poe was buried in an unmarked grave at the Westminster Presbyterian Church in West Baltimore. Eleven years later, when the site had all but disappeared from lack of upkeep, it was finally marked with a small piece of sandstone carved with the number “80.”

It is unclear whether that number had any significance to the Poe gravesite, and if so what it might have been. In the end, though, it didn’t matter. As the people of Baltimore learned about the miniscule stone marking the final resting place of their beloved Poe, pressure built to create a memorial that better reflected what he meant to the city.

In 1860, Edgar Allan Poe’s cousin ordered a proper marble headstone to mark his grave; however, that headstone was destroyed in a freak train accident while it was being fabricated. A replacement was never ordered, leaving the lackluster sandstone slab as Poe’s official tombstone for another fifteen years. A monument to mark Poe’s gravesite was completed in 1874, but its engraving includes an error that was never corrected.

Poe’s birthdate is listed on the stone as January 20th instead of January 19th. The reason for this oversight remains a mystery today. In addition to the date mix-up, the memorial was too big to fit in the space above the grave. So, Poe’s grave was moved. His body was exhumed and reburied beneath the memorial elsewhere in the church graveyard. Needless to say, the story of Edgar Allan Poe’s tombstone lives on as a favorite piece of Baltimore history. 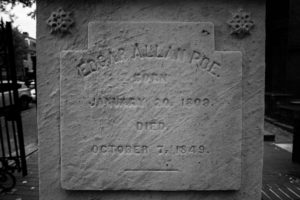 The Toaster at the Grave

Starting in 1949 and lasting half a century, an anonymous person, affectionately known as the “Poe Toaster,” visited Edgar Allan Poe’s gravesite on the eve of his birthday every year. The Toaster always left a partial bottle of cognac along with three roses at the site. On Poe’s birthday in 1999 a note was left informing the graveyard caretaker that the original Poe Toaster had died. The tradition, however, continued for another decade. To this day, the identity of the Poe Toaster(s) is unknown. 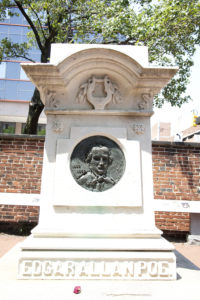 The modern-day Poe House and Museum is the former Baltimore residence of Edgar Allan Poe. It is said that he wrote nearly 25 stories, poems, and reviews while living in a small attic room at 203 Amity Street in Baltimore.

The house itself is the primary item on display, according to the Edgar Allan Poe Society. Artifacts relating to Poe’s life and various informational displays about his experiences in Baltimore are located throughout the Poe House. Baltimore is very proud to claim Edgar Allan Poe as one of its own, and that pride is evident in the amount of care that has gone into preserving his former home.

Stay at The Hotel at Arundel Preserve Near Baltimore

Whether you’re taking a single day to learn about the life of Edgar Allan Poe, three days to explore the best attractions Baltimore has to offer, or a week to visit Maryland’s most famed historical sites, the Hotel at Arundel Preserve provides the perfect combination of convenience and comfort. Just a short drive from Baltimore, and with easy access to all of Maryland’s main thoroughfares, we’re the perfect home base for all of your adventures.

Our luxurious guest rooms make it easy to rest up for the day ahead, and the Hotel offers dining options and amenities that will make you wish you never have to leave. Contact us today to inquire about our getaway packages and book your stay.