A border state, Maryland was home to both Union and Confederate sympathizers as the Civil War broke out in 1861.

However, the majority of Maryland residents pledged allegiance to the Union and remained in place instead of moving south. Due to the state’s unique location on the Mason Dixon Line and proximity to the U.S. Capital, Maryland became the site of many pivotal battles during the war.

Below are 10 sites from the Civil War to visit in Maryland.

Among the many Maryland Civil War battlefields, Antietam is probably the most well-known. The Battle of Antietam made history as the bloodiest battle of the Civil War, or any conflict since. Twenty-three thousand men were killed, wounded or went missing as Confederate and Union Soldiers fought the 12-hour battle.

Located in the Great Valley Region of the Appalachian Mountains Antietam National Battlefield is surrounded by breathtaking views and, of course, is rich with history. 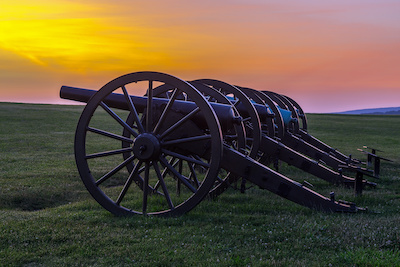 After the war of 1812, Fort McHenry underwent a series of improvements which expanded buildings and added defenses, just in time for the Civil War.

The Fort played a key role in defending Maryland from attacks via the waters of the Chesapeake Bay. Fort McHenry later housed not just Confederate prisoners of war, but also pro-secession political prisoners from Maryland and surrounding northern states. 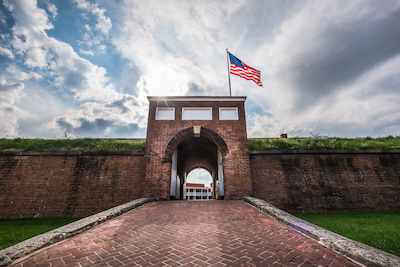 The first major Civil War battle site in Maryland saw bloodshed on September 14, 1862. South Mountain, the name given to the continuation of the Blue Ridge Mountains after they enter Maryland, is located just a short drive from Frederick, MD.

The Union victories at the Battle of South Mountain and Antietam are said to have been a catalyst for Abraham Lincoln’s famous Emancipation Proclamation.

Mary Surratt was the first woman to be executed by the U.S. government. She was sentenced to death for her role in the conspiracy that led to the assassination of President Lincoln, and her home became one of many famous Civil War sites in Maryland.

After fatally shooting the President, John Wilkes Booth began moving along a pre-planned escape route out of the city, gathering supplies as he went; three of his stops were to buildings owned by Mary Surratt. It is said that she provided him with guns, food, and binoculars, in addition to a place to rest his broken leg before moving on.

The Surratt Society, which is dedicated to the preservation and interpretation of history involving the Surratt family, operates the Surratt House Museum today.

The House of Dr. Samuel A. Mudd was another stop along the path of John Wilkes Booth as he fled after shooting President Lincoln.

Booth suffered a broken leg while escaping from Ford’s Theatre, and Dr. Mudd is said to have treated him shortly after. The Dr. Samuel A. Mudd House and Museum, located just a short distance from the Surratt  House aims to teach the public about Dr. Mudd’s story as it relates to the assassination of Abraham Lincoln.

Another famous Civil War battlefield in Maryland is Monocacy National Battlefield. In 1864 as Confederate General Jubal Early and his troops advanced towards Washington, General Lew Wallace and his Union army were there to meet them.

An eventual Confederate victory, the Battle of Monocacy has been called the Battle that Saved Washington because it stalled Confederate arrival in the Nation’s Capital, allowing time for the city to prepare defenses. Monocacy National Battlefield straddles the Monocacy River, just south of Frederick, MD. 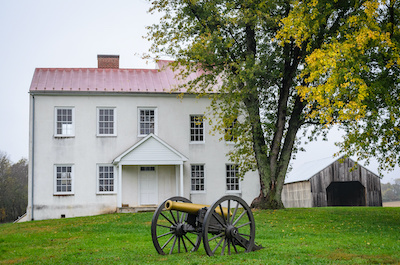 Yet another Civil War Landmark in Frederick, MD, The National Museum of Civil War Medicine is actually located in a downtown Frederick row home.

During the War the building served as a furniture shop. Today, visitors can learn about the doctors and surgeons, and their advancements, which made significant contributions to Civil War medicine.

Point Lookout has been a part of American history since it was explored by Captain John Smith in 1612. It was home to many raids during the American Revolution as well as the War of 1812.

After the Battle of Gettysburg, many Confederate soldiers were imprisoned at Point Lookout. We included this on our list of Civil War sites in Maryland because nearly 50,000 Confederate prisoners were held at the Point between 1863 and 1865.

At Point Lookout State Park today, you can visit the on-site museum as well as the Point Lookout Lighthouse, which was erected in 1830. 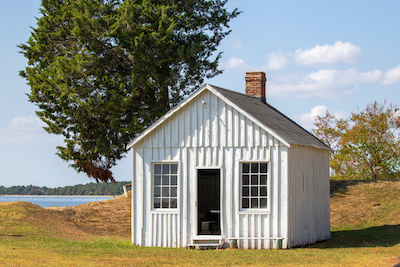 President Street Station was a vital location along the Underground Railroad during the Civil War. Additionally, on April 19, 1861, Confederate sympathizers battled Massachusetts volunteers making their journey to Washington via train.

Among the bloodless Civil War sites in Maryland can find Gathland State Park. Set on dozens of serene acres of rolling Maryland hills, Gathland was once the private home of Civil War Journalist George Alfred Townsend.

Townsend covered the story of President Lincoln’s assassination and its aftermath. He is said to have been the youngest correspondent of the War. Today, the park, which is situated along the Appalachian Trail, houses a monument dedicated to the memory of Civil War correspondents.

Stay at The Hotel at Arundel Preserve During Your Visit

It’s quite possible to spend days upon days traveling throughout Maryland as you learn about the state’s role in the Civil War.

Conveniently, most Civil War battle sites in Maryland are within a short drive from the Hotel at Arundel Preserve. This makes us the perfect location for a little R&R between day trips, and our deluxe accommodations and first-rate amenities leave little to be desired. Contact our team today to learn about special offers and book your stay.