In the 18th century, the Inner Harbor put Baltimore on the map as a major U.S. Seaport. Unfortunately, the shallow water of the Harbor was not conducive to larger ships which began to appear in the early 1900’s, and over time the warehouses, power plants, and piers surrounding the Harbor were abandoned and fell into decay.

In the 1950’s a revitalization of the inner harbor began, and over the decades that followed an incredible transformation took place.

301 E Pratt St, Baltimore, MD 21202
The USS Constellation is the last sail-only warship designed and built by the U.S. Navy. She was constructed in 1854 and is now preserved as a museum ship in the Baltimore Inner Harbor and has been designated a National Historic Landmark.

The ship’s artifact collection includes nearly 50,000 objects, photographs, and documents, many of which were donated by former crew members and their families. General boarding passes range in cost from $7-15 and guided tours start at $8. 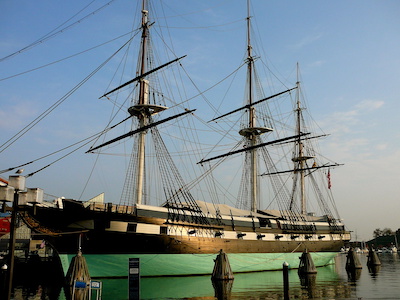 501 East Pratt Street, Baltimore, MD 21202
There’s no way we could leave the National Aquarium off our list of things to do at the Inner Harbor. The Aquarium is home to over 20,000 fish, birds, amphibians, reptiles, and marine mammals, so there’s no wonder it’s Maryland’s largest paid tourist attraction.

Inside you’ll find dozens of unique exhibits from Australia’s Blacktip Reef, to an Amazon River Forest, to a full dolphin show and experience. And you won’t want to miss the iconic Jellies Invasion where you can get up close with nine different species of jellyfish.

Want to up the ante? Try a private reptile encounter, group dolphin training experience, or an insider’s tour. Whether you have an hour or a day, we highly recommend a visit to the Aquarium. 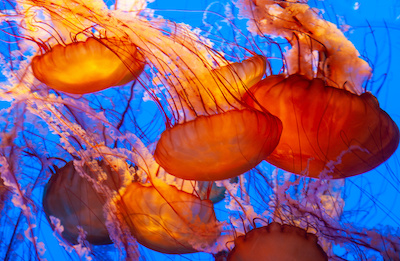 711 Eastern Avenue, Baltimore, MD 21202
Of all the things to do at the Inner Harbor, grabbing a bite to eat is probably on everyone’s list. McCormick & Schmick’s serves some of the Harbor’s best seafood, steaks, and cocktails, all within a warm, sophisticated atmosphere overlooking the Inner Harbor.

Their sustainable seafood program allows McCormick and Schmick’s to incorporate locally, sustainably sourced farm-fresh ingredients into their menu. Plus, they are known for their creative mixology using only the best fresh ingredients.

Whether you’re grabbing a cocktail and calamari during happy hour, or sitting down to enjoy steamed mussels and a signature fish dish, you won’t be disappointed at McCormick & Schmick’s.

601 Light Street, Baltimore, MD 21230
There is so much to see and do at The Maryland Science Center that you could easily spend an entire day here. Interactive exhibits for kids of all ages combine hands-on experience with learning and of course fun!

Visit Newton’s Alley where you can play a stringless harp, touch a cloud, and see sound. Or head to the SciLab where you and the kids will don lab coats and safety goggles before conducting scientific experiments. Don’t forget to stop by the Planetarium and Imax theater to get a peek at something new!

1415 Key Highway, Baltimore, MD 21230
Baltimore has always been recognized as a major industrial center, and the Baltimore Museum of Industry aims to showcase that legacy. It is located in an 1860’s oyster cannery and situated right on Baltimore’s Inner Harbor. Things to do inside the museum include dynamic exhibits, live demonstrations, tours, and activities which document the stories of the workers and businesses that made Baltimore a manufacturing powerhouse for nearly a century.

Maritime Museum – 301 East Pratt Street, Baltimore, MD 21202
In addition to the USS Constellation, Baltimore’s Inner Harbor is home to one of the most impressive collections of military vessels in the world, spanning over 200 years of Maryland’s maritime history.

The LV116 Chesapeake guided traffic along the Chesapeake Bay from 1930-1964. The USS torsk patrolled and torpedoed enemy ships off the coast of Japan during WWII. The USCG Cutter 37 was built in 1930 and used for law enforcement, search and rescue, and patrol missions. A single day pass will get you aboard each historic ship.

Hours vary based on ship and time of year, so confirm opening hours as you plan your visit.

34 Market Place, Baltimore, MD 21202
If you’re looking for things to do in Baltimore’s Inner Harbor after the sun goes down, look no further than Power Plant Live! Located in a redesigned coal-burning power station built for the United Railways and Electric Company in 1905, Power Plant Live! has nightlife and entertainment galore.

Sharpen your sleuthing skills at the Charm City Clue Room or improve your axe throwing prowess at Kraken Axes. When you’re ready for a bite, check out one of the culinary options such as Luckies Tavern or Underground Pizza. Wash down your meal at the Leinenkugel’s Lodge and Beer Garden before enjoying one of the many outdoor concerts held throughout the year. Entrance to Power Plant Live! is free, with the exception of Friday and Saturday nights which usually require a cover charge.

This outsider or “intuitive” art museum is located in what used to be a copper paint factory and whisky warehouse. Within the 1.1 acre campus you’ll find unique exhibitions, a sculpture barn, and wildflower garden. 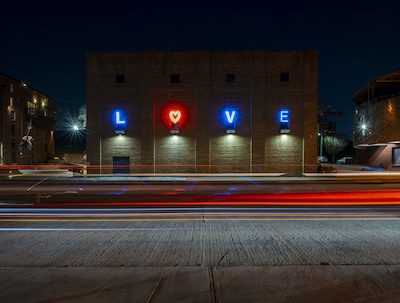 901 S. Broadway, Baltimore, MD 21231
Make your way to all the Inner Harbor’s things to do and places to visit via water instead of on foot. Pick up the Sagamore Ride for the perfect combination of whisky and history.

Hop on the Express Line from the Inner Harbor to Landing 11 in Historic Fells Point where you’ll find some of the city’s favorite waterfront bars and restaurants. Or grab the kids and skip across the Harbor to the National Aquarium before enjoying lunch at the Hard Rock Café.

Regardless of where you’re headed at the Inner Harbor, a trip on a Baltimore Water Taxi ups the excitement factor, and often cuts travel time. What’s not to love? 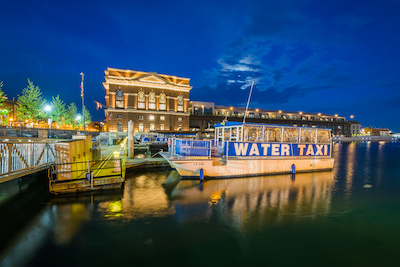 300 Warren Avenue, Baltimore, MD 21230
Among Maryland’s many historic sites you’ll find Federal Hill Park, which in addition to its historical significance, offers some of the best city views around! The area that is now the park was first identified by Captain John Smith in the early 1600’s and the name Federal Hill was adopted in 1788 as part of a celebration of our Constitution’s ratification. 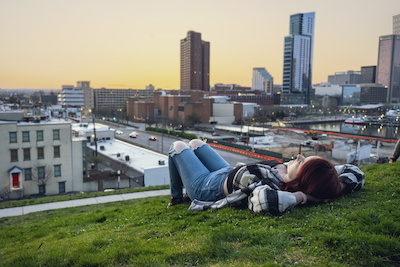 601 E. Pratt Street, Baltimore, MD 21202
It’s impossible to miss the neon Hard Rock Café sign hanging upon another historic power plant building, high above the water. The Hard Rock moved into the Inner Harbor in 1997 and has been a favorite destination ever since.

Their unique menu features house-made entrees full of local flair. And of course, the interior is covered with authentic, often historical, music memorabilia. Wrap up your meal with a stop at the gift shop to commemorate your visit.

35 Market Place, Baltimore, MD 21202
It’s attractions like the Port Discovery Children’s Museum, which aims to promote life-long curiosity in children of all ages, make Baltimore one of the best family vacation spots in Maryland. The museum includes three floors of hands-on exhibits that encourage kids to think as well as use their imaginations.

You’ll also find several indoor play areas and a variety of experiences designed just for infants and toddlers. Port Discovery really is the perfect attraction for the entire family. 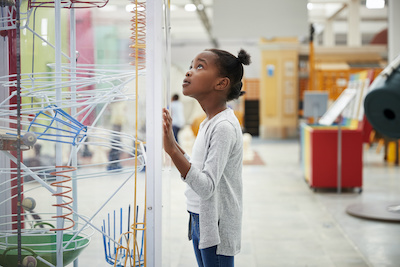 13. The Gallery at Harborplace

200 E. Pratt Street, Baltimore, MD 21202
A premier retail destination at the Inner Harbor, the Gallery at Harborplace is located at the gateway to the Waterfront Promenade. The Gallery is home to 23 national retailers and locally inspired shops including Pandora, Lamesa, Forever 21, Foot Locker, and DTLR.

555 Light Street, Baltimore, MD 21202
Enjoy the sights of Baltimore – by boat. Watermark Cruises traverse the Inner Harbor and surrounding waterways to provide stunning views of iconic Baltimore landmarks such as the Domino Sugar sign, the Key Bridge, and Fort McHenry.

History buff? Check out the National Anthem Tour where you’ll take in sites and hear stories related to the War of 1812. Love a good sunset? Hop aboard the City Lights Cruise for stunning views of the Baltimore Skyline at twilight.

800 E. Pratt Street, Baltimore, MD 21202
Of all the things to do in Baltimore’s Inner Harbor, The Reginald F. Lewis Museum of Maryland African American History and Culture is a must. The museum opened in 2005 and is the largest African American history museum in the state.

Through the permanent collection of 10,000 objects, special exhibits, and educational programs, the museum recounts the significant accomplishments and struggles of African American Marylanders throughout our state’s 400 year history.

Just a short drive from the Inner Harbor you’ll find one of the most uniquely luxurious boutique hotels in the area. With so many exciting things to do at the Inner Harbor, you’ll want a place to relax once you’ve checked them all off your list.

The Hotel at Arundel Preserve has everything you need to unwind after a day downtown exploring and enjoying the Harbor. A night in one of our perfectly appointed guest rooms or suites will leave you refreshed and ready to take on even more of Baltimore’s favorite Inner Harbor attractions and experiences.